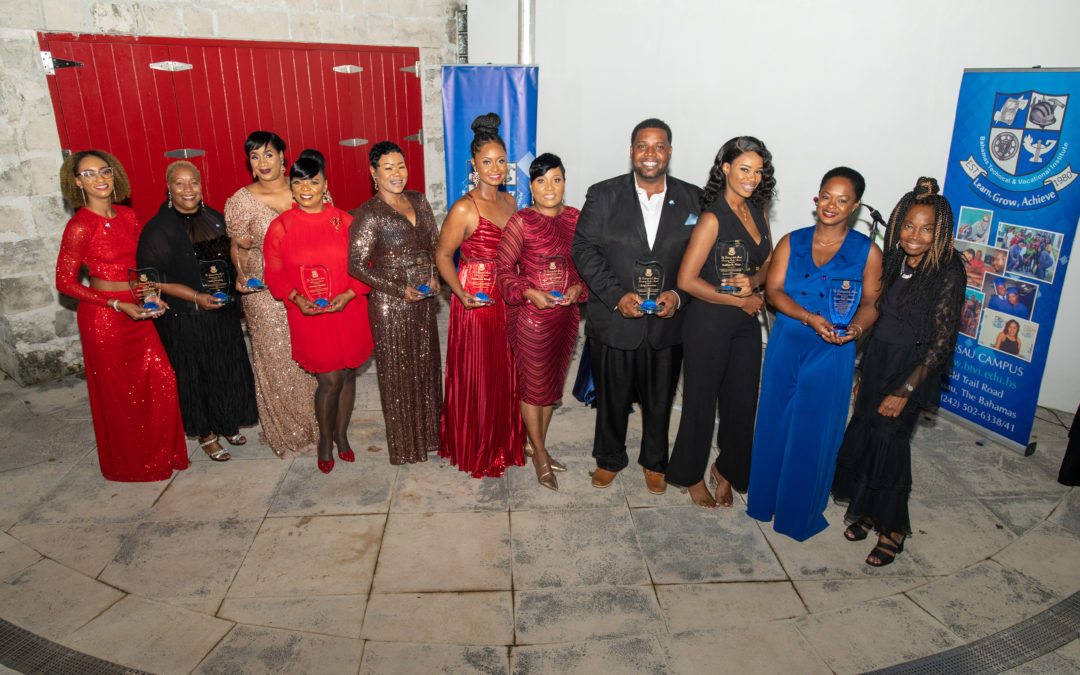 During an evening of glitz and glamour, the Bahamas Technical and Vocational Institute (BTVI) recently held its third annual Distinguished Alumni Awards.

The 10 alumni were recognised for professional achievements and impactful contributions made in their respective trades.

The magical event was staged in the amphitheater, also known as Fiona’s Theatre, on the grounds of the historic Villa Doyle, which houses the National Art Gallery of The Bahamas. It was also live streamed by BTVI’s Media Technology team on the institution’s Facebook page. That team, headed by Head of Department, Alexia Coakley, included students of BTVI’s Media Technology programme.

The Distinguished Alumni Award was given posthumously to Fashion Designer, Victor ‘JuJu’ Johnson. Mr. Johnson has sewn and altered garments for many prominent figures over the years including former Governor General, Sir Orville Turnquest, former Cabinet Minister, Carl Bethel and Bishop Neil Ellis and his wife, Lady Patrice Ellis. He was also responsible for sewing Saxons’ leader, Percy “Vola” Francis’ signature outfits which included the cape Junkanoo enthusiasts have come to expect him to wear. Mr. Johnson had a love affair with the cultural art form of Junkanoo and his costumes graced the stages of the Miss Bahamas Pageant, with one costume winning in 2013 with several designs in the runner-up category.

An electrifying fashion show was held during the awards ceremony. Models confidently adorned the styles of BTVI alumni and Fashion instructors, Kevin Evans and Mrylande Julien, sashaying through the crowd. The work of BTVI Fashion students, Taliah Wright and Makeisha Murray were also a part of the show.

Additionally, BTVI Board Director, Christopher Farrington, brought brief remarks on behalf of Board Chairman, Elvin Taylor, noting that it is the honourees’ achievements and the hosting of such events, which help raise the profile of BTVI and technical vocational education and training overall.

“I understand that in the past, we have had honourees from Grand Bahama and I am pleased that this year, there is representation from Andros. I envision that this will grow as we are an archipelago and BTVI is the technical and vocational capital of The Bahamas,” said Mr. Farrington.

“Honourees, we are pleased to pay homage to you during this evening of excellence. You are our chief ambassadors and are deserving of tribute. I encourage you to go into the world and preach the BTVI message, for what you achieve is to some extent a reflection of our success as a national institution,” he added.

BTVI’s Interim President, Dr. Linda A. Davis, expressed delight to participate in her first Distinguished Alumni Awards ceremony as head of the institution, highlighting the pride that those in the BTVI community know so well as they hold dearly to the belief that at BTVI students can ‘Discover their Passion’ through the trades.

“I wish to thank the awardees for representing all that is good about BTVI…there are no better ambassadors than our alums. In as much as we take the opportunity to celebrate and showcase them, those coming behind are more motivated to excel themselves,” said Dr. Davis.