From Pumps to Power tools 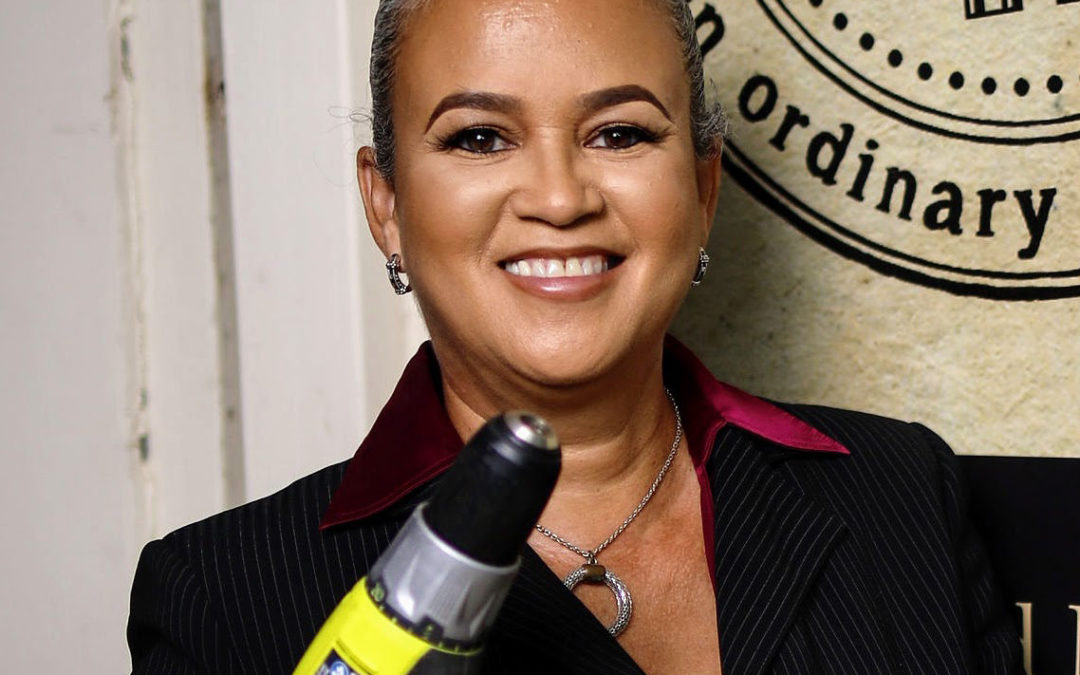 In 2002, Monique Glinton was ranked in the top 10 of the then Royal Bank of Canada’s Private Banking Relationship Managers in the world. Today, she is a carpenter and loving it.

Ms. Glinton, who is a 2013 alumna of the Bahamas Technical and Vocational Institute (BTVI), started her carpentry journey while still working in banking.

She discovered that BTVI was offering a personal development course in carpentry and convinced her then 13-year-old to attend the Saturday classes with her. By the end of the 10 weeks, together, they had built a 12-ft picnic table, which became the gathering point for her family for nearly a decade.

“I continued to work with the bank and the family business, but it was that first picnic table that I made with my own hands that lit a fire in me…I wanted to build. I wanted to create things. I wanted to become a carpenter. I wanted to do woodwork. That fire burning inside me was so bright, there was nothing else for me to do but to go to BTVI. I would not have been satisfied had I not gone to BTVI,” said Ms. Glinton.

Additionally, when Ms. Glinton finally decided to take her carpentry skills to another level following the short course, she enroll in BTVI’s carpentry certificate course. She was nearly 50, had a teenager who was a high school senior, adult children with her husband and was expecting the first grandchild. Nevertheless, her “supportive husband” Keith, gave her the green light to enroll in BTVI to study carpentry.

The woman who had an illustrious career in banking had traded her pumps for power tools.

“I was interested in how things were done in the house. I was interested when my husband was installing blinds. When tradesmen came to the house, I wanted to learn. One year, we were having work done and I asked the carpenter how much it would cost to create a pagola. When he told me the price, the labour alone, I knew it wasn’t happening. Here I was, a petite, size four, heel or pump-wearing female, wishing I was as strong and as capable as those men and could go out there, build my own pagola and build my own outdoor room,” she stated.

Motivated by her father, who at 57 started a new career, Ms. Gibson admitted she was nervous during her first class of the carpentry program.

“During the first break, the instructor comes over to me and asks, ‘Are you sure you’re in the right class?’ But you see, I wasn’t his typical student. Not only was I the only female in this class, but I was definitely the oldest. But it was in that class that I was able to learn how to safely use all the tools. By the end of the semester, I was no longer afraid of power tools,” she said with a sense of victory.

“I just felt so empowered. Here I am as a woman and I am doing big things. Every tool you can think of, I have. That year for Christmas, I told my husband, don’t buy me any shoes. I didn’t want any bag. Don’t get me any jewelry. I wanted power tools. The highlight of the tools he bought was my Dewalt table saw,” said Ms. Glinton, who was initially “deathly afraid” of power tools.

For Valentine’s Day in 2015, Ms. Glinton wanted to do something different for her husband. Prompted by the myriad of gift baskets being sold, she came up with the male version of a gift basket. She decided to build him what she dubbed, ‘A Man Box.’ She filled it with all his treats, nailed it shut and replaced the ribbon and bow with twine and a pry bar he needed to open the box.

The first man box was a hit and a few weeks later, Ms. Glinton’s sister referred her on Facebook to someone who was looking for a unique gift for a man. That was the start of her business, Custom Creations 242.

“With the first sale of that man box under my belt, I felt confident enough to offer it for Fathers’ Day with hopes of selling 25 man boxes. But that first year, we sold over 100 man boxes,” she revealed.

Today, Ms. Glinton builds custom made furniture including the adirondack chairs – with one being built out of deconstructed pallet wood; she has also refurbished her own bathroom cabinets, built in-door furniture, tv stands, tables, an outdoor room and more.

The BTVI graduate acknowledged her father as introducing her to the Do-It-Yourself concept and her mother for teaching her to cook, bake and sew. She said she grew up in a house where the children were very involved in activities.

Questioned by an attendee of the alumni speaker series about what it is like being a carpenter, she responded, “I love it. It brings me joy. It’s not just building, but the joy I see when my clients are happy, when I take something I’ve built with my hand and the person who is purchasing the gift is so excited about what they are giving. What more can you ask for?” she questioned.