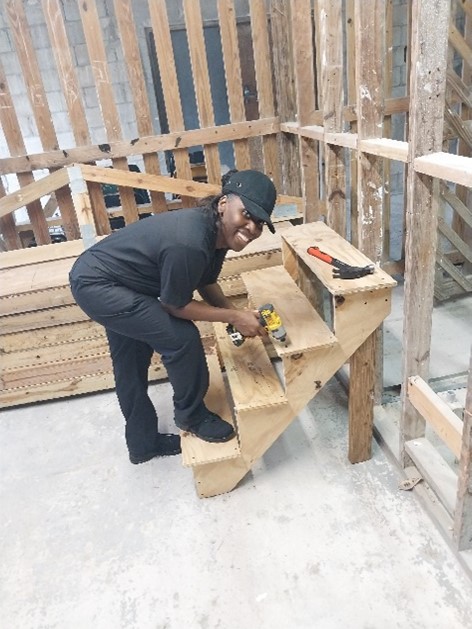 Tameka Jones is chiseling a wooden frame in preparation for door hanging during a BTVI Carpentry class. Tameka Jones uses the drywalling skills she learned at BTVI while on a construction site. Tameka Jones is a Carpentry and Electrical Installation student at BTVI. She is shown here leveling a stairway’s post to ensure it was straight.

BTVI Carpentry and Electrical Installation student, Tameka Jones, is seen using a jack hammer to drill a hole in a wall, making way for electrical pipes. With a practical component to courses, Tameka Jones, is shown using a torch to bend a PVC pipe for ground rough-in while in an Electrical class at BTVI.

As a female who has worked on the construction of some of the houses in the government subdivision of Pinecrest, Tameka Jones is proud to have received such experience even before she has graduated from the Bahamas Technical and Vocational Institute (BTVI).

The former Spanish teacher of eight years, who has a Bachelor of Science Degree in Tourism Management from The College of The Bahamas – now University of The Bahamas – said she is a “more hands on” person and is passionately pursuing her entrepreneurial dreams. Today, she is simultaneously studying Carpentry and Electrical Installation, often wearing steel toe boots.

This past summer, Tameka got the opportunity to be an apprentice with Arawak Homes Ltd. The company is a partner of BTVI and Tameka took advantage by consistently being on the construction site, soaking up information and getting practical experience. Having just enrolled in BTVI in fall 2021, she described it as an opportunity of a lifetime.

“I got more hands-on experience than anticipated. While on the construction site, I was able to do drywalling, door framing and assist with door hanging,” she said.

The first phase of the Pinecrest Subdivision in the South Beach area consists of 47 homes. All models feature three bedrooms and two bathrooms, have concrete frame construction, along with storm-rated windows and doors.

BTVI Carpentry instructor, Nihon Glinton, is now teaching Tameka for the third semester and is pleased with her progress.

“Tameka is inquisitive. Her efforts stand out. She is always requiring more information; she is not afraid to ask. Some female students hold back because the field is male dominated,” said Mr. Glinton.

“She wants to move up in the industry. She is tenacious. She is a part of a melting pot of human resources for the construction field. The industry is changing. I believe in diversity,” said Mr. Glinton, who himself has been in the field for over 20 years.

As a former Construction Supervisor at Mosko, Mr. Glinton is impressed with Tameka’s proficiency in carpentry, which he noted has “improved dramatically.” He added that in Blueprint Reading, out of the two classes of 40 students, Tameka was in the top three. For Carpentry I, she was the only female in the class and got the highest final grade out of 10 students. There are currently 55 students in BTVI’s Carpentry programme.

“Tameka was not intimidated by the tools, she had nearly perfect attendance and was always first to class,” he stated.

Additionally, Tameka’s interest in carpentry was piqued because of her interest in the creation of design and staging props. She knew that building them would require her to have carpentry and electrical knowledge.

Having a “passion” for design and creativity, her favourite aspect of the field is finished carpentry.

“It ties in more with the design part of my interest. I hope to achieve a level of expertise that would take design on a different level locally and internationally,” said the 42-year-old.

So far, Tameka has worked on framing, drywall, and hanging doors and windows alongside professionals. Among her personal designs is a night light plaque using basic knowledge to wire up a battery to a switch and lights. This was in addition to creating a wooden base.

Questioned as to what she would say to other females wishing to enter male-dominated trades, Tameka said, “Go for it if there is an interest. No matter what the bias may tell us, everyone has been given the power to do anything they put their mind to.”

Admitting that there have been challenges in lifting heavy items every so often, that does not deter Tameka from her pursuits. In fact, she continues to watch television shows for inspiration, including Property Brothers, Love It or List It, Masters of Flip and Insane Pools among others.

“At first there was minor criticism as it relates to my strength, but as time went on, I learned to work on a level that is comfortable for me while at the same time getting as much exposure as possible,” she stated.